Recycle Week is over and recycling communications are taking a more modern approach. We take a look at some of our favourite environmental communications campaigns from back in the day

For Recycle Week this year, WRAP produced a powerful video to spread the message that It’s In Our Own Hands. Gone are the friendly cartoon images showing cans coming back to life as aeroplanes; for 2019, we are urged to act before the coming apocalypse. It’s a compelling message in a world that still tells us to use positive language, applaud small changes and, it sometimes seems, to march for change without too closely examining our own behaviour.

So, as we reflect on our efforts to encourage people across the nation to recycle, what better time to drop the words and take a look at the power of pictures, with some of our all-time favourite environmental communications campaigns.

Packaging up waste isn’t a new idea, but there’s a reason why it has been repeated over the years.
This version, produced by Saatchi & Saatchi for Surfrider Foundation, says it all. 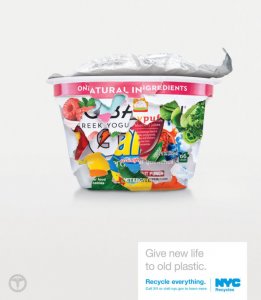 Even with the expansion of its kerbside organics collection and the introduction of a ‘save-as-you-throw’ programme, New York City is still some way from its goal of sending zero waste to landfill by 2030. Since Michael Bloomberg launched this campaign in 2013, recycling has risen to just under 20%.

Not a campaign, but still one of our favourites, American illustrator, designer and author Lou Brooks
created this nod to the modern environmentalist.

This last image, from Emirates Environmental Group, was way ahead of its time. Produced in 2008, it tackled issues that have taken almost 10 years to hit the mainstream.

And then, there’s this Paris E-waste amnesty!

And my own personal favourite? Despite (or maybe thanks to) a deep-seated aversion to Ed Sheeran, there’s something so scarily close to home about the way the guy in the Global Citizen video flourishes his flow chart that cracks me up every time!

01453 297 457Standing room only at RWM's Packaging Theatre     If there was ever any doubt that packaging is one of the defining topics of our age, two days of fierce debate and jam-packed audiences at the Valpak Packaging Theatre proved there is still much...

The role of zero waste in the fight against climate change

01453 297 457The role of zero waste in the fight against climate change   We've spent years calling for greater public engagement on waste. But now it's here, is it diverting attention away from the bigger issues? Welcome to Zero Waste Week! Now into its twelfth...